Tasting notes - A lovely, lightly perfumed nose with the appealing fruit aromas of blackcurrant and notes of cedar, minerally gravel and violets. The fruit in the mouth is forward and surprisingly powerful. Harmonious and balanced in the midpalate with a good grip and great length. 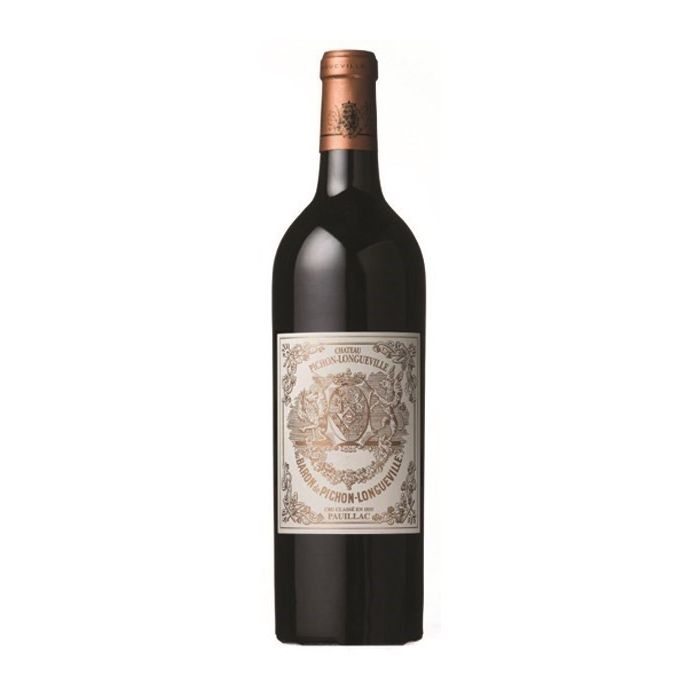 Beautiful concentration and depth of cedar and opulent
fruit flavours, powerful yet elegant with enormous
potential. A classic.
Producer Note
The history of the Pichon family goes back to the Middle Ages. Since then, numerous
family members have played a role in the history of Bordeaux. In 1964, Jacques de
Pichon, Baron de Longueville, married the daughter of Pierre de Rauzan, who created
the estate. Their descendants were thereafter much involved with the property of
Pauillac. Raoul de Pichon-Longueville built the current Château in 1851. His family lived
there until 1933. In 1987, AXA-Millésimes acquired the estate. The new owners
completely restored the Château and installed ultramodern wine making equipment.

Vineyard
The 73 hectare estate features high quality gravelly soil, with large pebbles and sand,
which are typical of the appellation and provide an ideal viticulture terroir. The subsoil
composition allows the retention of water to feed the roots, while the undulating relief of
the gravel soils is ideal for drainage. Low in nutrients and with little excess water, this
unique soil sparingly nourishes the vines, whose average age is 30 years. The maritime
climate, with its proximity to the Gironde estuary, has a tempering effect on the warm
summers. The estate is actively committed to protecting the environment. The vineyard
is planted as follows: 62% Cabernet-Sauvignon, 32% Merlot, 4% Cabernet Franc and 2%
Petit Verdot, and is meticulously divided into separate plots. Each plot receives specific
care and attention adapted to its particular profile. The vines are Double Guyot trained
with pruning, desuckering, topping and crop thinning taking place to promote healthy
vines.
Winemaking
The grapes were manually sorted before and after being destemmed. Traditional
vinification took place with each parcel being vinified separately in temperature
controlled stainless steel small vats. Fermentation started at a moderate rate, enabling
gentle and progressive extraction to suit each terroir. Maceration lasted for 15 to 18
days for the younger vines and 20 to 24 days for the older vines. The wine was aged in
French oak barrels for 18 months, of which 80% were new and 20% were of second
passage, with racking every three months.
Tasting Note
A lovely, lightly perfumed nose with the appealing fruit aromas of blackcurrant and
notes of cedar, minerally gravel and violets. The fruit in the mouth is forward and
surprisingly powerful. Harmonious and balanced in the midpalate with a good grip and
great length.
Grape
Cabernet Sauvignon 80%, Merlot 20%