Pale straw with green hues. A delicate, bouquet of lime and tropical fruits, with hints of green apple, citrus blossom and talc. Fresh and lively, lime and Granny Smith apples tantalize the taste buds, with a zingy and zesty mouth feel and great acid balance. 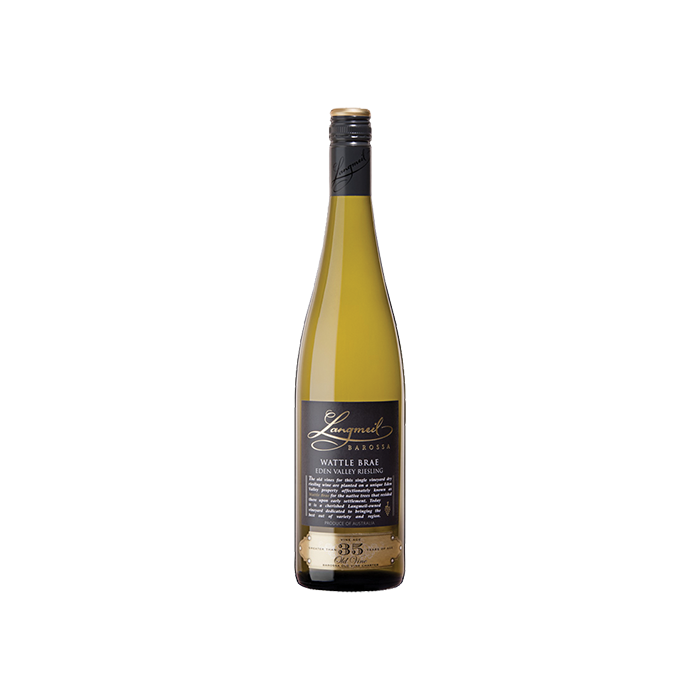 The old vines for this single vineyard dry Riesling wine are planted on a unique Eden Valley property affectionately known as Wattle Brae for the native trees that resided there upon early settlement.  Today it is a cherished Langmeil-owned vineyard dedicated to bringing the best out of variety and region.

VINTAGE REPORT The Barossa experienced a wetter and cooler (2°C) than average winter and spring with good soil moisture levels. Vines grew slowly but healthily, mostly flowering well and setting a good number of bunches.  Temperatures were below average in December and January with few heat spikes and rains of 40mm spread evenly over four events kept the vines healthy with an unhurried veraison.  The 30 - 40mm summer rains of 4 - 6 February were followed by windy conditions and four consecutive 37°C days. This helped dry out canopies and prevent berry split. Additionally, soil moisture levels were topped-up, maintaining the canopies during a cooler than average summer. The rest of February remained dry and a warm March (average maximum temperature 28°C) saw the beginning of an Indian Summer which lasted until the third week of April with above average temperatures (2.5°C). This was perfect grape ripening weather with balanced sugars, colours and natural acidity.  These conditions resulted in a later harvest, some three to four weeks, than recent years, which was a return to ‘normal’. The later harvest allowed grapes to ripen more slowly and evenly with a gradual accumulation of sugars and flavours, which is exactly what we look for when making high quality Barossa wines. The yields were around 20 - 30% higher than the five year average. Eden Valley Riesling is predicted to be a stand-out this year and another strong year for Barossa Valley Shiraz which promises to deliver an array of styles from bright and aromatic wines from the earlier-picked vineyards through to concentrated, intense and well-structured wines.

Aroma: A delicate, bouquet of lime and tropical fruits, with hints of green apple, citrus blossom and talc.