Tasting notes - The complexity that comes with ages shines with lifted honeysuckle and toasty notes on the nose. The rich and honeyed palate is brimming with lemon citrus fruits and finishes with a chalky, mineral freshness. Delicious with shellfish in a creamy sauce. 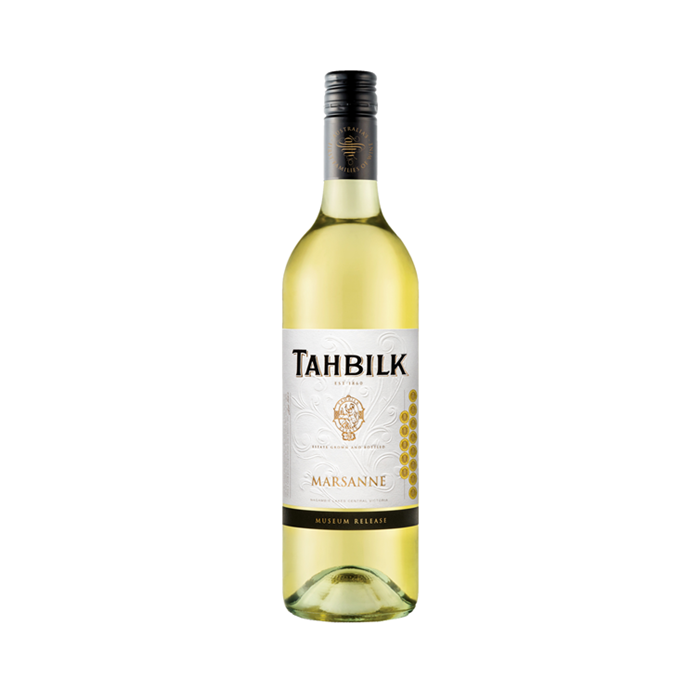 Pungent and lifted honeysuckle and buttered toast notes
lead to a rich, nutty and honeyed palate, brimming with
lemon citrus fruits on the finish.
Producer Note
Established in 1860, Tahbilk is an historic family-owned winery, renowned for their rare
aged Marsanne. The estate has the world’s largest single holding of the varietal and
produces Marsanne from vines established in 1927, which are among the oldest in the
world. Tahbilk is known as ‘tabilk tabilk’ in the language of the Daungwurrung clans,
which translates as the ‘place of many waterholes’. It perfectly describes this premium
viticultural landscape, which is located in the Nagambie Lakes region of Central
Victoria. The estate comprises 1,214 hectares, including a seven mile frontage to the
Goulburn River. Environmental sustainability is paramount at Tahbilk and in 2013 they
became carbon neutral. In 2016, Tahbilk was awarded 'Winery of the Year' by James
Halliday.
Vintage
Winter rainfall returned to average levels which continued into spring, but tapered off,
thus irrigation took place from budburst through to the end of vintage. The season
looked particularly promising until a late, severe frost in mid-October hit delicate young
growth in many of the low-lying plains vineyards which are situated away from the
water and the native tree cover of the Tahbilk billabongs. A very hot, dry summer
resulted in an early start to the harvest. Despite the hot, dry summer the whites have
delicacy, crispness and definite varietal character.
Vineyard
Tahbilk’s vineyards are grouped along the banks of the Goulburn River and an
anabranch of it which flows through the estate. The water has a tempering influence
on the climate. The vines are grown at approximately 134 metres elevation of gently
undulating and flat terrain. The soils are sandy loam with ferric oxide content, which
vary from very fine sand near the anabranch to denser loams on the plains. The vines
planted prior to 1986 are on ARG rootstocks. They are trained on a single wire trellis with
a mixture of head and cordon training, with cane pruning. Tahbilk's vines are
sustainably cultivated; composting and mulching takes place which improves soil
health by promoting earthworm activity. Mulching helps to control weeds and
conserves water, reducing vine stress. The grapes were hand-picked.
Winemaking
Made in a reductive style – without contact with oxygen to preserve the fresh, fruity
character. The fruit was destemmed, lightly crushed and cooled through a heat
exchanger and pressed. The must was clarified and fermented with neutral yeasts at
low temperatures of 10 to 12°C, fermenting at 0.5 to 1°Baume per day. The ferment
stopped at 2 to 3 grams per litre residual sugar. The wine did not go through malolactic
conversion in order to retain its crisp character. It was then protein stabilised, cold
stabilised, medium filtered, blended and bottled.
Tasting Note
The complexity that comes with age, shines through with lifted honeysuckle and toasty
notes on the nose. The rich and honeyed palate is brimming with lemon citrus fruits and
finishes with a chalky, mineral freshness.
Grape
Marsanne 91%, Riesling 5%, Chardonnay 1%, Roussanne 1%, Sauvignon Blanc 1%,
Verdelho 1%