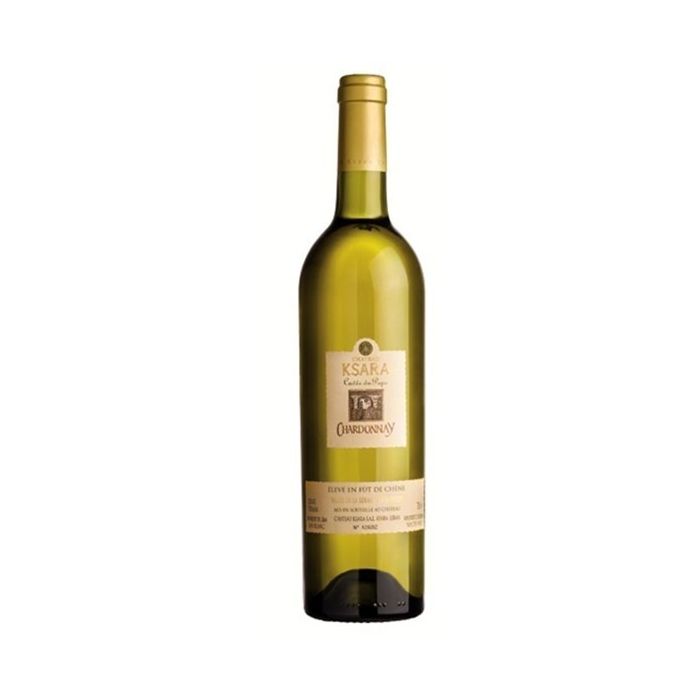 Vanilla and buttery notes from oak ageing complemented by ripe tropical and lemon fruit through to a fresh and zesty finish.

Château Ksara is Lebanon's oldest winery. Its traditions can be traced back to 1857 when a group of Jesuit monks acquired the property. The Jesuits applied their knowledge of science and agriculture to plant French vines as well as develop two kilometres of Roman caves that proved ideal for the storage of wine. The Jesuits sold the winery to its current owners in 1973. Ksara is now the most modern winery in the region as well as the largest producer in the country. Their annual production is over 2.8 million bottles and they sell their wines in more than 40 countries worldwide. Château Ksara is certified ISO 9001 and ISO 2200.00 for its viticulture, production and sales guaranteeing quality and consistency year on year.

Sharp changes in diurnal temperatures were registered during the ripening period, which increased the period between véraison and the harvest to over 120 days. Vineyard

Ksara's vineyards are located in the central and western Bekaa Valley at an average altitude of 1,000 metres above sea level. The Bekaa Valley enjoys dry summers and has its own natural water table, courtesy of the melting snow running off the Lebanon and Anti-Lebanon mountain ranges. Cool nights help the vineyards to withstand the heat and drought of the summer. The vines are either double Guyot or cordon trained and are grown in stony soils which are predominantly chalked. The vineyard is not irrigated and the standard yield is between 40 and 45 hectolitres per hectare. The grapes can be considered to be grown organically because of the very limited use of sulphur-based pesticides.

The must be left to settle prior to fermentation which took place in oak casks, in the cool temperatures of the cellar. The wine was stirred on its lees for 10 months before bottling, which added a creamy complexity to the wine.

Delicate vanilla, nutmeg and toasty notes from oak ageing are complemented by ripe lemon fruit and honeyed peach. Full-bodied on the palate, with racy definition balancing the creamy texture.