Tasting notes - Varietally expressive with ample plum and blackberry fruits, there is a warm earth and spicy savouriness that immediately appeals with a backbone of fine, opulent tannins and a rich, persistent finish. Serve with tender lamb shanks in a hearty tomato gravy with creamy mash. 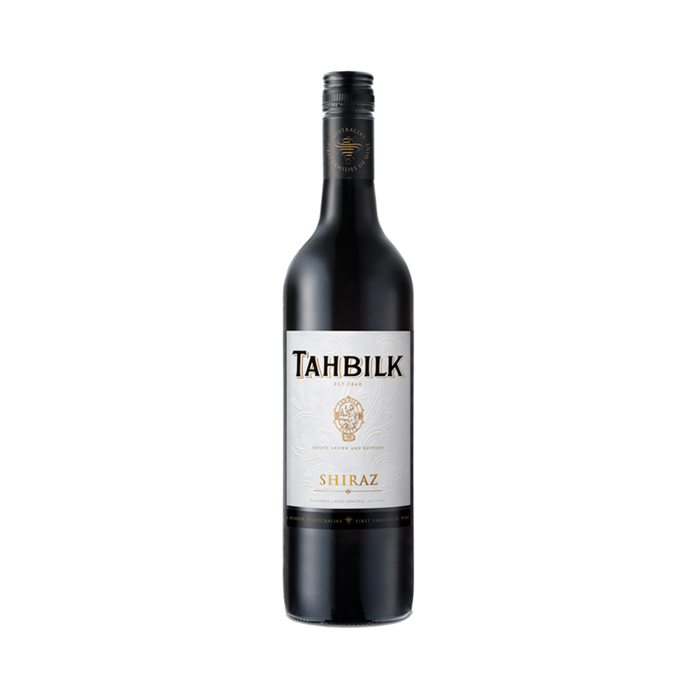 An expressive and juicy Shiraz with ample plum and
blackberry fruits and a warm spicy savouriness from
eucalpytus and herbal notes.
Producer Note
Established in 1860, Tahbilk is an historic family-owned winery, renowned for their rare
aged Marsanne. The estate has the world’s largest single holding of the varietal and
produces Marsanne from vines established in 1927, which are among the oldest in the
world. Tahbilk is known as ‘tabilk tabilk’ in the language of the Daungwurrung clans,
which translates as the ‘place of many waterholes’. It perfectly describes this premium
viticultural landscape, which is located in the Nagambie Lakes region of Central
Victoria. The estate comprises 1,214 hectares, including a seven mile frontage to the
Goulburn River. Environmental sustainability is paramount at Tahbilk and in 2013 they
became carbon neutral. In 2016, Tahbilk was awarded 'Winery of the Year' by James
Halliday.
Vintage
Good rainfall during the 2016 winter set good crop levels. A temperamental spring saw
warmish rainy days, requiring diligent vineyard management to keep the vineyard
disease free. Summer seemed transient, but ripening continued at a steady pace
though to a late harvest. Wines show distinct varietal flavours with bright fruit and
elegant, fine structures.
Vineyard
Tahbilk’s vineyards are grouped along the banks of the Goulburn River and an
anabranch of it which flows through the estate. The vines are grown at around 134
metres elevation of gently undulating and flat terrain. The soils are sandy loam with
ferric oxide content, which vary from very fine sand near the anabranch to denser
loams on the plains. Tahbilk has Shiraz vineyards dating back from the 1860s to the
1990s. The oldest surviving block is the ‘1860 block’; planted on its own roots in sandy
soils, which has made it impossible for phylloxera to colonise the vine roots. The vines
are planted on single wire trellises, with a mixture of head and cordon training; all are
cane pruned. Tahbilk's vines are sustainably cultivated; composting and mulching
takes place which improves soil health by promoting earthworm activity. Mulching
helps to control weeds and conserves water, reducing vine stress. The old vines are
hand-picked while younger vines are machine harvested.
Winemaking
Traditionally vinified, fermentation took place in original open vats over 155 years old,
with 18 months' maturation in similarly-aged large French oak prior to bottling. Smaller
predominantly French oak barrels were also used, with the wine from these blended
back during the final filtering and bottling.
Tasting Note
Varietally expressive with ample plum and blackberry fruits, there is a warm earth and
spicy savouriness that immediately appeals with a backbone of fine, opulent tannins
and a rich, persistent finish. Serve with tender lamb shanks in a hearty tomato gravy
with creamy mash.
Grape
Shiraz 91%, Merlot 7%, Mourvèdre 1%, Other Varieties 1%
Winemaker: Alister Purbrick
Region: Victoria
Subregion: Nagambie Lakes
Country: Australia
Alcohol: 13.5%