Tasting notes - This Pinot Noir is characterised by its purity of fruit, focus and freshness. Fine powdery tannins frame notes of black cherry, pomegranate, rose petal and raspberry on the deliciously succulent palate. 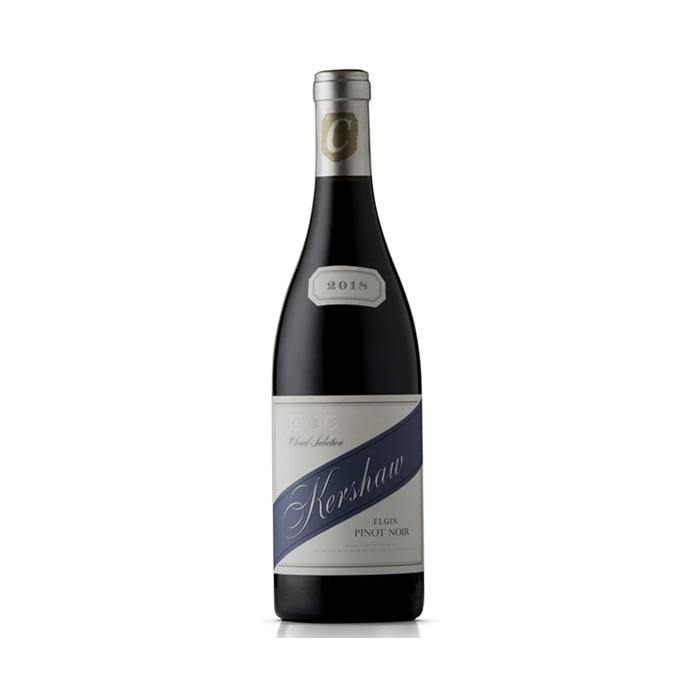 Vintage
Below-average winter rainfall resulted in drier soils and as a result the crop sizes were
smaller, as less ground water was available for the tap roots. Wet, cool and windy
weather during flowering meant less fruit was pollinated. However, the smaller berries
delivered high aromatic intensity and good colour for the reds. During the vegetative
period the days were warm, but without damaging heatwaves and the growing
season was cool, resulting in fruit with excellent balance.
Vineyard
The grapes come from 11 tiny vineyard parcels in several locations in the Elgin Valley.
Elgin is the coolest wine region in South Africa and is situated on an inland, hexagonalshaped plateau, at an altitude of 300 metres. The region is surrounded by mountains
and lies just over six miles from the Atlantic Ocean, which brings occasional sea-borne
mists. February is the hottest month of the year, with daytime temperatures peaking at
23°C and night-time temperatures dipping to 14°C. The benefit of this cooler climate, is
that the grape cluster stays connected to its roots for longer, so it develops complex
characteristics and achieves physiological ripeness more gradually, resulting in lower
sugar levels and consequently lower alcohol levels. The French vine clones PN777,
PN667, PN115 and PN113 flourish in the Bokkeveld Shale and Cartref soils, which offer
good drainage and produce elegant wines.

Winemaking
The grapes were hand-picked, manually sorted and destemmed before being
transferred to small open-topped fermenters. A three-day maceration took place
followed by spontaneous fermentation with wild yeast. Skin contact lasted for 10 to 12
days before being run off and the remaining marc was gently basket pressed. The wine
was racked by gravity to barrel where malolactic conversion took place. Maturation in
French oak lasted for 10 to 11 months. Each clone and soil type was micro vinified as a
separate batch; the average comprised 39.4% in new oak; and 82.2% was aged in
228-litre barriques with 17.8% in 500-litre casks.

Tasting Note
This Pinot Noir is characterised by its purity of fruit, focus and freshness. Fine powdery
tannins frame notes of black cherry, pomegranate, rose petal and raspberry on the
deliciously succulent palate.