The Caley is the pinnacle of a long winemaking journey of excellence, that
rightfully honours one of Yalumba’s most adventurous sons. A blend of
Coonawarra Cabernet Sauvignon and Barossa Shiraz, The Caley is a classic
marriage of two noble varieties and two great Australian wine regions. 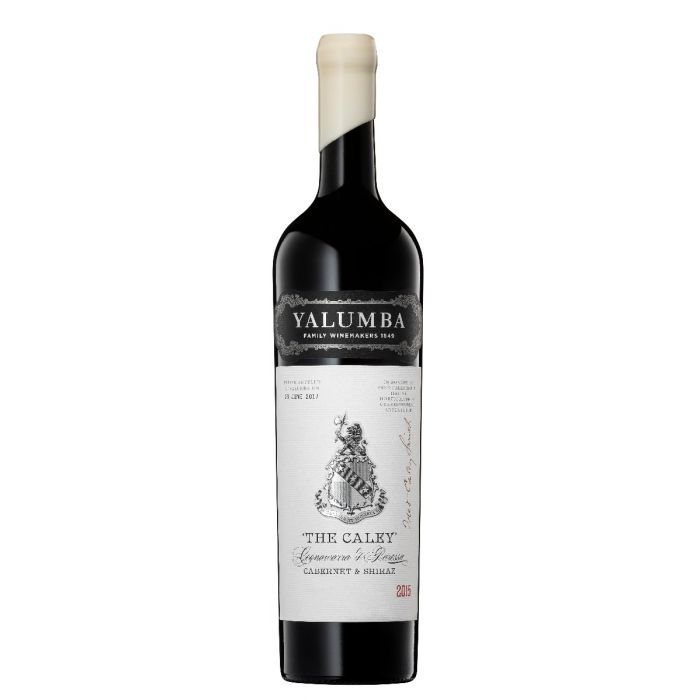 The Caley is the pinnacle of a long winemaking journey of excellence, that
rightfully honours one of Yalumba’s most adventurous sons. A blend of
Coonawarra Cabernet Sauvignon and Barossa Shiraz, The Caley is a classic
marriage of two noble varieties and two great Australian wine regions.

VINTAGE CONDITIONS
Coonawarra: Mid-winter rains were followed by a dry,
warm spring. Flowering was earlier than average and
was completed quickly and evenly. The dry summer
conditions kept berry size small, producing fruit with
excellent concentration of colour, flavour and tannin.
Barossa: Consistent rainfall throughout winter led into
a warmer and drier than average spring.
The long, mild summer had few heat spikes
accompanied by cool nights which retained the
acidity and pristine fruit flavours, producing grapes
of great aromatics and concentration.
TERROIR/PROVENANCE/REGION
The Ming D block in the Yalumba Coonawarra
vineyard provides the 74% Cabernet Sauvignon
of this blend. This 2.7 ha plot was planted in 1992
with two clones of Cabernet Sauvignon selected
for structure and depth of flavour. The Caley’s 26%
Shiraz component was sourced from two Barossa
blocks. The first from the Burgemeister “Linke” block
planted in 1901 at Light Pass. The second block is
the Horseshoe Vineyard on the southern side of the
Yalumba winery in Eden Valley. Planted by Helen HillSmith in 1971, this block follows the contours around
the Fred Caley Smith Hut.

Deep, dense red in colour. Distinct Coonawarra
Cabernet Sauvignon aromas: fresh, cool and refined
green olive, leafiness, iodine and intriguing, fine and
complex aromatics. Richness and precision, revealing
refinement of Shiraz with red currant and spice.
Perfectly balanced acid and tannin line sweeping
through to the long finish.
WINEMAKER Kevin Glastonbury
REGION 74% Coonawarra Cabernet
26% Barossa Shiraz
TOTAL ACIDITY 6.5 g/L
PH 3.49
SO2 111 mg/L
ALCOHOL 14%
TREATMENT Matured for 21 months in 46% new
French barriques, balance in 2 year
and older French barriques.
CELLARING Built to spend many years in the
cellar, The Caley takes time to reveal
its true character. Drinking beautifully
on release the wine will live on for
decades in the cellar. If opened as
a younger wine we recommend
double decanting prior to serving.