Tasting notes - With wonderful intensity of colour, the 1996 vintage is full of floral aromas and rich, sweet fruits. The opulent palate explodes with fruit, complexity and structure wrapped in a deep elegance through to an endless finish. 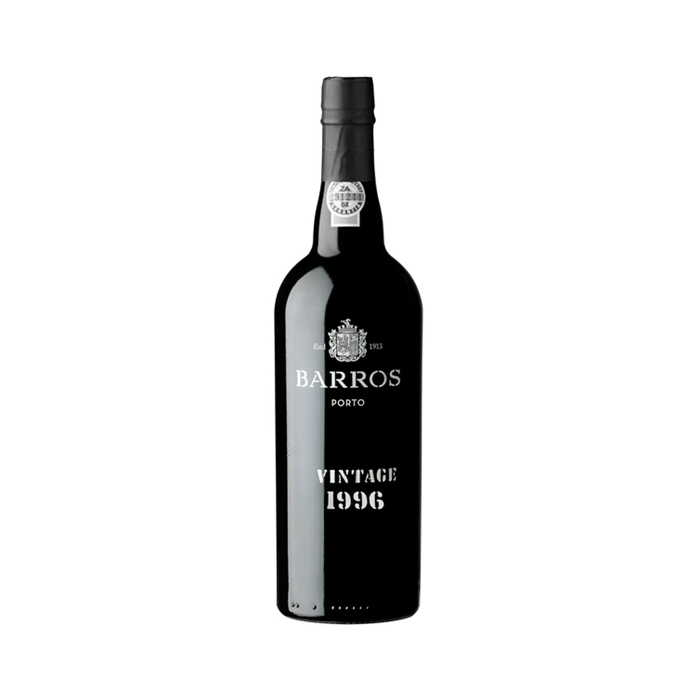 Lovely balance between power and finesse with a silky
texture and beautifully sustained flavours.
Producer Note
Having celebrated its 100th year of trading in 2013, Barros Port is undoubtedly one of
the most prestigious companies producing and trading in Port. Much of their success
comes from Colheita Ports - old Tawnies from a single year matured in cask for a
minimum period of seven years. Their expertise in Colheita Ports has established them
as the stand-out producer of this style. Barros leaves their Colheita Ports to mature in
cask until being hand bottled to order. The loss of wine from evaporation (known as the
'Angel's Share') is much higher in comparison to bottle ageing. It is a sacrifice they are
willing to make and one that helps them achieve unsurpassed quality in their Colheita
wines. In June 2006, Barros was integrated into the Sogevinus Group which is growing
the brand in international markets.
Vintage
The prolonged drought in parts of southern Portugal broke spectacularly, with high
rainfall in the winter of 1995/96. Spring was mild and vine development was gradual
resulting in a harvest at the end of September. Careful work in the vineyard ensured the
flavours were concentrated in the berries, resulting in a rich, fruity wine.
Vineyard
The vines are grown on terraces cut into the steep hillsides of the Douro Valley; they are
planted along the terraces of the greatest slopes, the “Vinha ao Alto”, which translates
as "vertically planted vines". The vineyard soils are schist greywacke ante-Ordovician,
with some granitic formations. This soil is rich in nutrients and has useful water retention
properties. Traditionally, the vines in the region are grown low, close to the ground. The
single or double Guyot and unilateral and bilateral cordons are the methods most
frequently used for training the vines. The grapes are manually harvested at optimum
maturity.
Winemaking
The grapes were destemmed, crushed and macerated on the skins in order to obtain
the necessary richness, body and fruitiness needed for a vintage Port. Fermentation
took place in 'lagares' and vats with constant pump overs during the vinification.
Temperatures were controlled and maintained at between 28 to 30°C, until the desired
Baumé was reached. At this stage, grape brandy was added, which is known as the
‘benefit’, resulting in a naturally sweet, fortified wine of exceptional quality. Bottled
between the second and third year after the harvest.
Tasting Note
With the wonderful intensity of colour, the 1996 vintage is full of floral aromas and rich, sweet
fruits. The opulent palate explodes with fruit, complexity and structure wrapped in a
deep elegance through to an endless finish.
Grape
Touriga Nacional 40%, Tinta Roriz 25%, Tinta Barroca 20%, Tinta Amarela 10%, Other
Varieties 5%
Winemaker: Carlos Alves
Region: Douro
Subregion: Douro
Country: Portugal
Alcohol: 20%