Tasting notes - Giramonte delivers complex aromas of blackcurrant and raspberry fruits highlighted by delicate aromas of cinnamon and vanilla. Rounded on the palate, with savoury notes and refreshing streak which balances the dense, yet silky tannins. Persistent and harmonious with a layered finish. 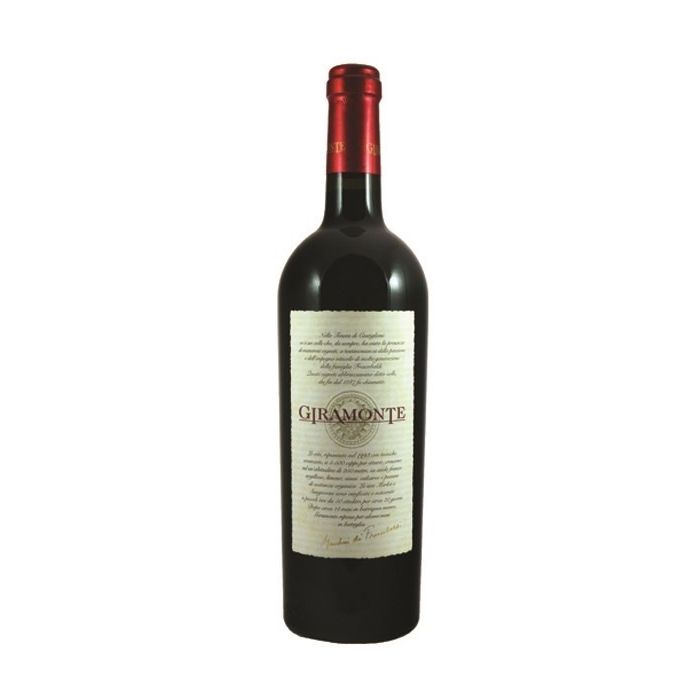 Producer Note
Tenuta di Castiglioni was the first estate cultivated by the Frescobaldi family, which
has produced over 700 vintages. The family’s passion for wine in this area started in
Castiglioni, along the road of the same name, which the ancient Romans built to link
Rome to Tuscany. On the gentle hills of Val di Pesa, southwest of Florence, the
combination of the terroir, the mild climate and the characteristic afternoon sea
breezes from the Tyrrhenian Sea is expressed in the Tenuta di Castiglioni wines which
are structured, generous and show a rich, purity of fruit. Gambero Rosso awarded
Frescobaldi with the prestigious ‘Tre Bicchieri Winery of the Year Award 2020’, in
recognition of its uncompromising commitment to quality and innovation.

Vintage
Following a particularly dry and mild winter, the 2017 growing season began a week
earlier than the previous year. Spring began with cool, wet weather encouraging the
accumulation of the water reserves necessary for the vines’ development.
Temperatures increased in June and the summer was hot and dry lasting until the
harvest; with the exception of a few isolated showers in August which brought much
needed respite to the plants. The harvest season was particularly favourable with an
extended period without rainfall and good diurnal temperature differences; ideal for
the accumulation of polyphenols within the grapes.

Vineyard
Tenuta Castiglioni is situated in the gentle hills of Val di Pesa. The richness of the
weather and the terroir is expressed in the structure of the wines, due to the
symbiosis between the soil, the mild climate and the afternoon breezes from the
Tyrrhenian Sea. The vines are grown in well drained, dry, and stony soils, which are
poor in organic matter and have a clay and limestone content. The grapes were
hand-harvested at optimum maturity.

Winemaking
The grapes were gently pressed, followed by fermentation in temperature controlled
stainless steel tanks for 12 days. Maceration on the skins lasted for 25 days for the
Merlot and 21 days for the Sangiovese. Malolactic conversion took place in
barriques immediately following the alcoholic fermentation. The wine was aged for
16 months in new barriques, followed by a further six months in bottle.

Tasting Note
Giramonte delivers complex aromas of blackcurrant and blueberry fruits highlighted
by delicate aromas of sweet spice, toasted notes, cinnamon, coffee and vanilla.
Broad and full on the palate, with savoury notes and refreshing streak which
balances the dense, yet silky tannins.