a wine which retains the style and personality of the indigenous grapes while broadening its aromatic profile and complexity by adding qualities of the Bordeaux style of wine. To maintain a high standard of quality, we chose to produce it only in those years which provided grapes suitable for a fine wine. 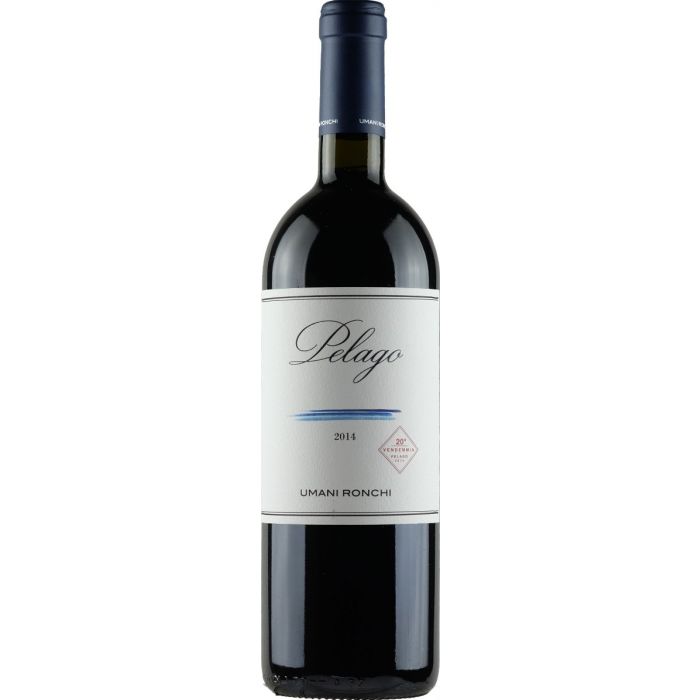 Team leader Hamish Anderson was impressed by this Gold winner’s ‘great nose and classical palate’, going on to describe ‘lavender and pepper aromas, with red fruit, spice and minerals, as well as good grip and structure on the finish’. Joshua Castle of Noble Rot described ‘tannins suave and captivating, along with tomato leaf, ripe red fruit and cardamom spice’, while team leader Lionel Periner thought the palate ‘mature, full bodied, complex, with an elegant finish’.

The vineyard from which Pelago originates is situated on our estate in the municipality of Osimo, at about

100‐150 meters above sea level, on a south‐east‐ facing hillside. The terrain, which started out as marine

The yield is limited by very close pruning and targeted thinning, and can vary from five to 5‐7 tons per

hectare according to the season.

The grapes are picked by hand, and collected and transported in boxes. Harvesting starts at the beginning

of September with the Merlot, continues at the end of the month with the Cabernet Sauvignon, and

finishes with the Montepulciano, a fairly late variety, in October, when the grapes have reached peak

condition with an advanced degree of phenolic ripening.

The grapes are destalked and lightly crushed, then fermented at 27‐29°C in steel fermentation tanks, with

the cap submerged, for 14‐15 days on natural yeasts. Once the malolactic fermentation has taken place,

the wine is trans‐ ferred to 225 litre oak barrels for ageing, for a period of 14 months. After bottling,

Pelago is left to age further, in a temperature‐controlled environment, for about 12 months.

Pelago joined the list of the most sought‐after Italian wines in the world in 1997, with its first year

of production, when it won the Best Red Wine trophy at the International Wine Challenge in

London. Pelago is the result of the insight of our technical group, who had the idea of mating

Montepulciano with Cabernet Sauvignon. It is a wine which retains the style and personality of the

Bordeaux style of wine. To maintain a high standard of quality, we chose to produce it only in those

years which provided grapes suitable for a fine wine. The name Pelago, deriving from pelagos,

meaning ‘sea’ in ancient Greek, suggests its marine character and the special qualities of taste and

aroma which are typical of wines produced near the coast.