Just a mile away from the city of Montepulciano, near the border between Tuscany and neighbouring Umbria,
La Braccesca, an Antinori property since 1990, is situated in two very close, but entirely different, zones:
the classic and prestigious area of Vino Nobile, and Cortona, which has made a name for itself for Syrah.
Santa Pia is produced from a 15-hectare (37 acres) vineyard located on the ridges just below the town of
Montepulciano. This particular area has sandy loamy soils rich in rocky deposits known as “scheletro” that allow
Antinori to create an elegant yet traditional expression of the Sangiovese grape that reflects the characteristics of this
historic winemaking area. The first vintage to be produced was 2001. 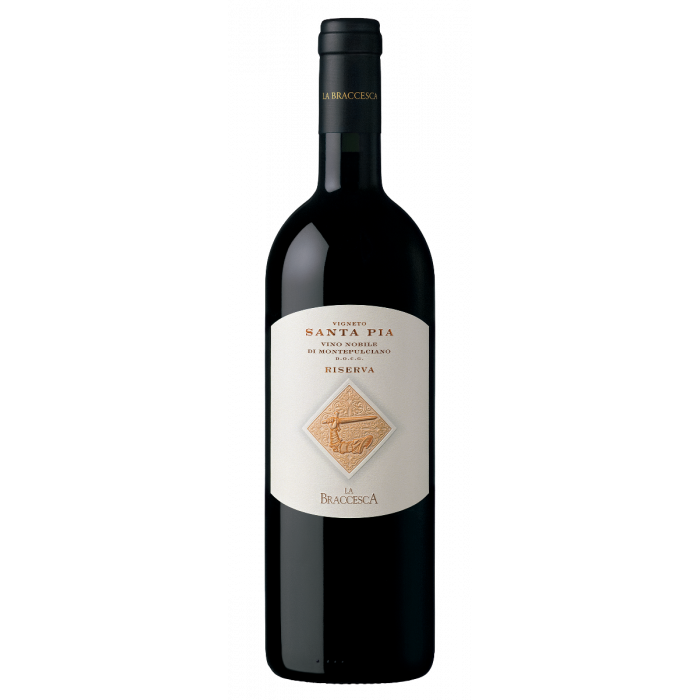 Classification
DOCG riserva
Climate
Autumn saw mild temperatures with scarce precipitation
followed by winter 2016 that started out with warm dry
weather. These climatic conditions persisted until the end of
March and determined bud break 10-15 days earlier than
average. Temperatures cooled offat the end of April slowing
down shoot growth, partially counterbalancing premature
growth. The first half of summer was rainyaccompanied by cool
temperatures. Halfwaythrough July,a hailstorm struck the area
causing some damage to vineyards facing southwest. However,
berries were stillatan earlystage of developmentand damaged
grapes were promptlyremoved from the vines therefore we
were able to harvest perfectly healthy grapesalthough
quantities were slightlylower. The month of August brought
beautiful weatherand excellent temperature fluctuations
between dayand night; conditions thatallowed a normal,
gradual ripening phase and optimal development of phenolic
and aromatic compounds. Harvesting of Sangiovese began at
the end of September.

Grapes were brought to the cellarand immediately destemmed and gently crushed. The must was transferred to
stainless steel tanks where alcoholic fermentation occurred ata controlled temperature of 26-28 °C (80-82 °F),a
method that preserves Sangiovese’s typicalaromas. Maceration on the skins lasted for 20 daysand upon completion
of the process, the wine was transferred to 500 liter tonneaux for malolactic fermentation and barrelaging that
lasted forapproximately 12 months. The wine was then aged in bottles foran additional 20 months before being
released for sale.
Historical Data
The La Braccesca estate covers some 1255 acres (508 hectares) where once were located the holdings of the Bracci
counts, who gave their name both to the propertyand its count ofarms:an armor-clad arm holding asword. The
overallvineyard surface consists of 850 acres (340 hectares)and is divided into two blocks: the first, 575 acres
(233 hectares) is situated on the border between Montepulciano and the neighboring township of Cortona. The
second, instead, 255 acres (103 hectares) insize,arrives close to the cityitselfand includes three highlyrenowned
sub-zones for the production of outstanding red wine: Cervognano, Santa Pia,and Gracciano. Santa Piais
produced from a 37 acre (15 hectare)vineyard situated in the site of the same name, located the terraces below the
town of Montepulciano. Its unique soil, medium in texture and consistence, rich in stonesand sand, have assisted
the ambition to produce an elegant, butat the same time classic, example of Sangiovese, one capable of transmitting
the a highlyrecognizable expression of this historic production zone. The firstyear of production of Santa Pia was
the 2001.
Tasting Notes
Santa Pia 2016 isan intense rubyred color. The nose is dominated byfragrant notes ofviolets, typical of
Sangiovese, nicely balanced with spicy hints ofvanilla. The palate is fresh, savoryand vibrant with silkytannins. Its
finish is lengthy,ample with a notable aftertaste of vanilla.