Tasting notes - Made by the 5th generation of winemakers, this claret is marked by fine blackcurrant and raspberry fruits, with an elegant touch of spice. Lively and balanced on the palate, with fine tannins, it has a deliciously rounded finish. 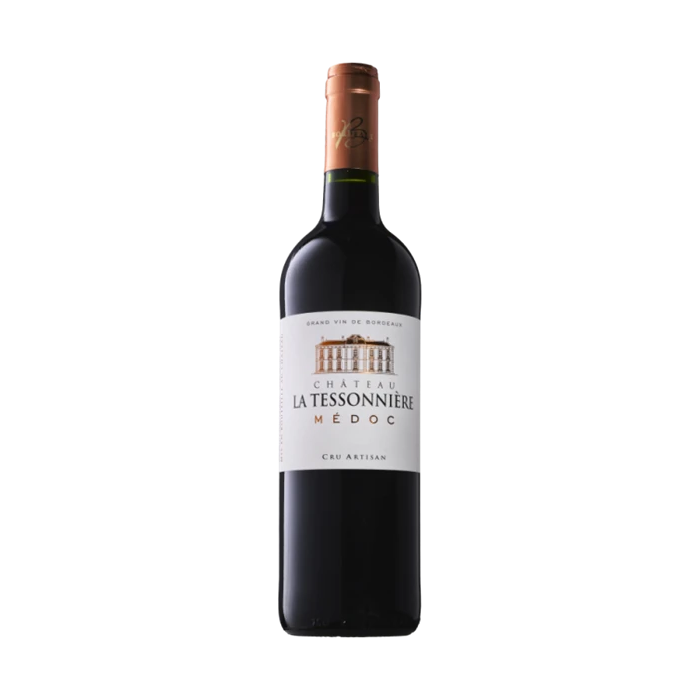 Made by the 5th generation of winemakers, this is a
classically styled Bordeaux wine that is marked by fine
blackcurrant and raspberry fruits with a touch of graphite.
Producer- Note
The Chevreux family originated from St. Aubin de Blaye and acquired the vineyards in
Civrac-en-Médoc and in Bégadan at the beginning of the last century. At this time,
Alphonse Chevreux established the Château la Tessonnière. He named the château
after ‘Tessoun’ which formerly in Gascon dialect meant ‘badger burrow’ as the estate
was full of them. In 1995, Cédric Colemyn, the great-grandson of founder Alphonse
Chevreux and the fifth generation of winemakers took over the running of the Château.
Having studied viticulture and oenology, he brought with him a dynamic vision and
invested in the vineyards, resulting in the Cru Artisan designation.
Vintage
2016 has been lauded as an excellent and classic vintage. Bordeaux saw a wet spring
in 2016, which built up the soil water reserves nourishing the vines throughout the
exceptionally dry summer which followed. The glorious, warm, dry days were coupled
with cool nights, perfect for grape maturation and concentration of flavours. Rainfall in
September revitalised the vines. 2016 produced small, ripe grapes and the wines are
marked by structured tannins, balancing acidity and superb aromatics.
Vineyard
The 18 hectare estate is situated in Civrac en Médoc and Bégadan on the left side of
the Gironde estuary, approximately 70 km north-west of Bordeaux. The estate is
managed sustainably and Château Tessonnière holds the Haute Valeur
Environmentale (HVE3) certification, which officially recognises the environmental
performance of winegrowers, including biodiversity conservation, plant protection
strategies, managed fertiliser use and water resource management. The estate is
primarily planted with the Bordeaux varieties of Cabernet Sauvignon and Merlot, with
smaller parcels of Cabernet Franc, Petit Verdot and Malbec. The 25-year old vines are
planted at a density of 6,500 vines per hectare on clay limestone ridges. These slightly
oily soils constitute a balanced soil; combining the freshness and humidity of the clay
with the filtering properties of the limestone. The fruit benefits from the temperate
climate and the sunny exposure of the plots. The grapes are harvested when they have
reached optimum maturity levels, following tastings and oenological analysis.
Winemaking
The grapes from each plot were carefully selected and totally destemmed. Traditional
vinification took place with fermentation in stainless steel tanks and concrete vats at
controlled temperatures averaging 26°C. Twice daily pump-overs ensured the desired
level of extraction and aeration of the wine. Following vinification, the wine was aged in
18 months in vat before being bottled without fining, to preserve the fruity character.
Tasting Note
Made by the 5th generation of winemakers, this claret is marked by fine blackcurrant
and raspberry fruits, with an elegant touch of spice. Lively and balanced on the palate,
with fine tannins, it has a deliciously rounded finish.
Grape
Merlot 52%, Cabernet Sauvignon 46%, Cabernet Franc 2%
Winemaker: Cédric Colemyn
Region: Bordeaux
Subregion: Médoc
Country: France
Alcohol: 13%