Tasting notes - The majority of Cabernet Sauvignon in the blend yields a wine with ripe blackcurrant, cedar tree and earthy aromas. Notes of bilberry, spice and hints of cigar continue on the palate which is enveloped in smooth, ripe tannins. This wine shows lovely balance, depth and structure with an elegantly spiced finish. 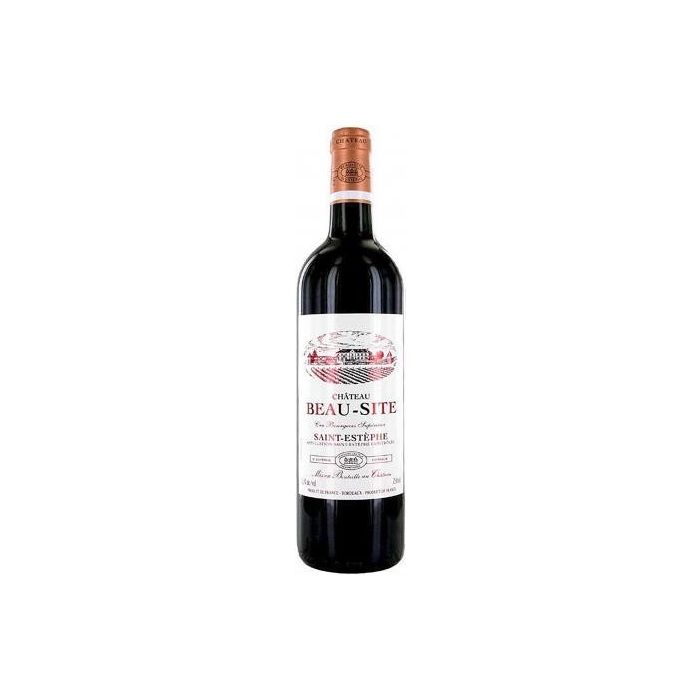 Classic and traditionally styled Saint Estèphe showing
cedar oak with earthy hints of dark chocolate and a
meaty texture.
Producer Note
"Beau-Site means beautiful site and lies just behind Grand Cru Château Calon-Segur
on one of Medoc's highest points with fantastic views over the river Gironde. It was
originally classified as a Cru Bourgeoius Superieur in 1932 but in 1966 Beau Site was
reclassified as a Cru Grand Bourgeois Exceptionnel. The Castéja family, who also own
Château Batailley and Château Trotte Vieille, bought the château in 1955. The
château has nearly 100 hectares of vines with an average age of 35 years. Beau-Site's
18th century underground cellar is one of the oldest in the Médoc and presents the
perfect maturing conditions for a wine that is vinified with the same care and technique
as a Grand Cru Classé. Beau-Sites wine is full of power and temperament, a typical
Saint-Estèphe with tannins allowing for stocking this wine for some years."
Vintage
2013 in Bordeaux was a challenging vintage, resulting in lower yields. A cool, wet
winter, continued into spring, but the summer brought about warmer, sunny weather
which allowed the grapes to achieve good ripeness levels. September was cool, but
good diurnal temperatures differences promoted ripening. 2013 required attention in
the vineyard; precise focus on the harvest dates, meticulous selection of the grapes
and care and attention in the cellar, has resulted in a satisfying wine, which has
retained its structure and aromatic fruit.
Vineyard
The vineyard sits on predominantly gravel soil which provides good drainage for the
vines. The vines, which have an average age of 36 years, are trained according to the
double Guyot method and are planted at a density of 5,500 per hectare. The average
yields are 40 hectolitres per hectare.
Winemaking
The grapes were manually sorted and destemmed before being gently pressed.
Fermentation took place in temperature controlled stainless steel vats for four weeks,
with each plot vinified separately. Malolactic fermentation took place in the stainless
steel tanks. The wine was then matured in French oak 225 litre barriques for a period of
16 months.
Tasting Note
The majority of Cabernet Sauvignon in the blend yields a wine with ripe blackcurrant,
cedar tree and earthy aromas. Notes of cherry, cranberry, spice and hints of liquorice
continue on the palate which is enveloped in smooth, ripe tannins. This wine shows
lovely balance, depth and structure with an elegant finish.
Grape
Cabernet Sauvignon 80%, Merlot 15%, Petit Verdot 3%, Cabernet Franc 2%