Tasting notes - Pale golden yellow with a persistent effervescence, this creamy wine offers a good depth of flavour. Ripe, rich fruits dominate, complemented by an abundance of fresh apple, apricots and a tangy hint of orange zest. Harmoniously balanced, the texture is tight with an inviting streak of minerality and a crisp finish. 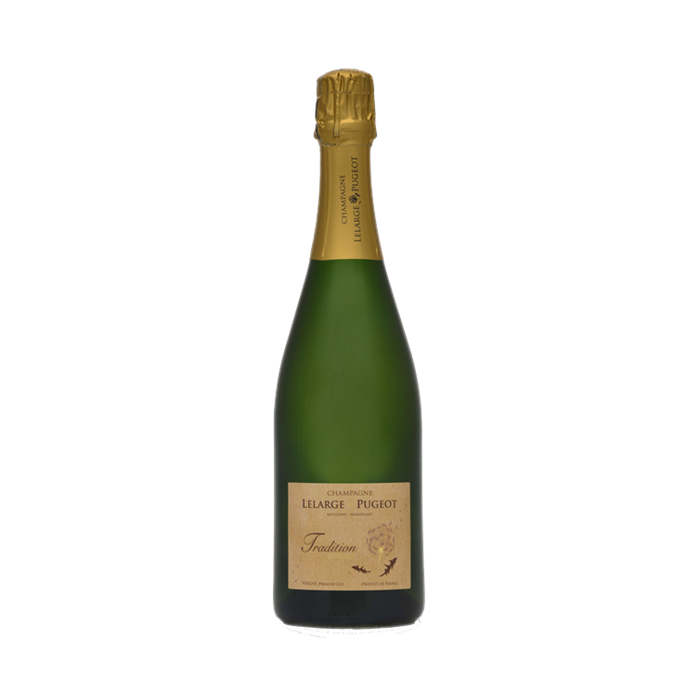 A richly yeasty yet dry Champagne with broad flavours of
dried apricot, orange zest and walnut through to a tangy
finish.
Producer Note
Champagne Lelarge-Pugeot is a boutique, organic grower based in Vrigny, a Premier
Cru village situated in the north east of Montagne de Reims. The Lelarge family has
been making wine since 1789 and Champagne since 1930. Today the estate is
headed up by seventh generation Dominique Lelarge, along with his wife Dominique
Pugeot and their children. The wines are dominated by Pinot Meunier due to the north
eastern orientation of the vineyard. They believe in letting the grapes thrive as naturally
as possible in order to express the pure essence of terroir. Biodynamic principles are
practised in the vineyard and they were certified organic in 2013. Champagne LelargePugeot follows a philosophy of minimal intervention in the winery and their handcrafted
wines are poised, elegant and a true reflection of the Vrigny terroir.
Vineyard
The vineyard is spread over 42 distinct parcels in and around the Premier Cru village of
Vrigny and is farmed according to organic and biodynamic methods. The vineyard
comprises eight hectares and the vines grow over gently rolling hills, at altitudes of 150
metres above sea level. The grapes for this cuvée come from a blend of 30 of the
parcels from Vrigny, where the soils are sandy loam and calcareous marls. The
Chardonnay vines are pruned according to the Chablis method, with the reds
according to the Cordon method. The vineyard is ploughed by horse during the year,
to prevent soil compaction, allowing the top layers of soil access to oxygen and
boosting the overall health of the soil, vines and grapes. Grasses and plants are used
between the vine rows to impart valuable nutrients to the soil. Harvested by hand.
Winemaking
The grapes were pressed using a pneumatic press, followed by a long "débourbage"
or settling period. A small amount of sulphur was added prior to the fermentation. The
alcoholic fermentation took place in stainless steel tanks using their "pied de cuve",
which is a technique used in natural winemaking to employ natural yeasts. A small
batch of must is used to start a spontaneous fermentation using indigenous yeasts,
once this has been deemed successful, this “pied de cuve” is then added to the
remaining must to start the fermentation process. Following fermentation, this cuvée
underwent natural malolactic conversion and was bottled the following April. The wine
spent four years ageing on its lees in bottle.
Tasting Note
Pale golden yellow with a persistent effervescence, this creamy wine offers a good
depth of flavour. Ripe, rich fruits dominate, complemented by an abundance of fresh
apple, apricots and a tangy hint of orange zest. Harmoniously balanced, the texture is
tight with an inviting streak of minerality and a crisp finish.
Grape
Pinot Meunier 50%, Pinot Noir 40%, Chardonnay 10%